Whereas, October is Domestic Violence Awareness Month, and we recognize it as a time for all of us to speak up about domestic violence, raise awareness, and support survivors of this devastating but common issue; and

Whereas, the impact of domestic violence is wide-ranging, directly affecting individuals and society, here in Allegany County and throughout the United States; and

Whereas, on average, nearly 20 people per minute are physically abused by an intimate partner in the United States. In one year, this equates to more than 10 million women and men; and

Whereas, the problems of domestic violence are not confined to any group or groups of people but cross all economic, age, racial and societal barriers, and are supported by societal indifference; and

Whereas, members of the LGBTQIA community suffer from intimate partner violence in greater numbers than the heterosexual community; and

Whereas, domestic violence has negative impacts on the wider society and is estimated to cost the US between $5.8 and $12.6 billion annually in such expenses as increased healthcare costs and lost productivity at work; and

Whereas, the crime of domestic violence violates an individual’s privacy and dignity, security, and humanity, due to systematic use of physical emotional, sexual, psychological, and economic control and/or abuse including abuse to children and the elderly; and

Whereas, research shows that creating communities where people are connected, supported, and care for one another, can reduce incidents of domestic violence;

Now therefore, in recognition of the ALLEGANY COUNTY DOMESTIC VIOLENCE CONSORTIUM and. the many programs serving the survivors of domestic violence throughout Allegany County, I, Curtis W. Crandall, Chairman of the Allegany County Board of Legislators, DO HEREBY PROCLAIM the month of October 2021 as DOMESTIC VIOLENCE AWARENESS MONTH and urge all citizens to actively participate in the scheduled activities and programs sponsored by the ALLEGANY COUNTY DOMESTIC VIOLENCE CONSORTIUM to work toward improving victim safety and holding perpetrators of domestic abuse accountable for their actions against victims. 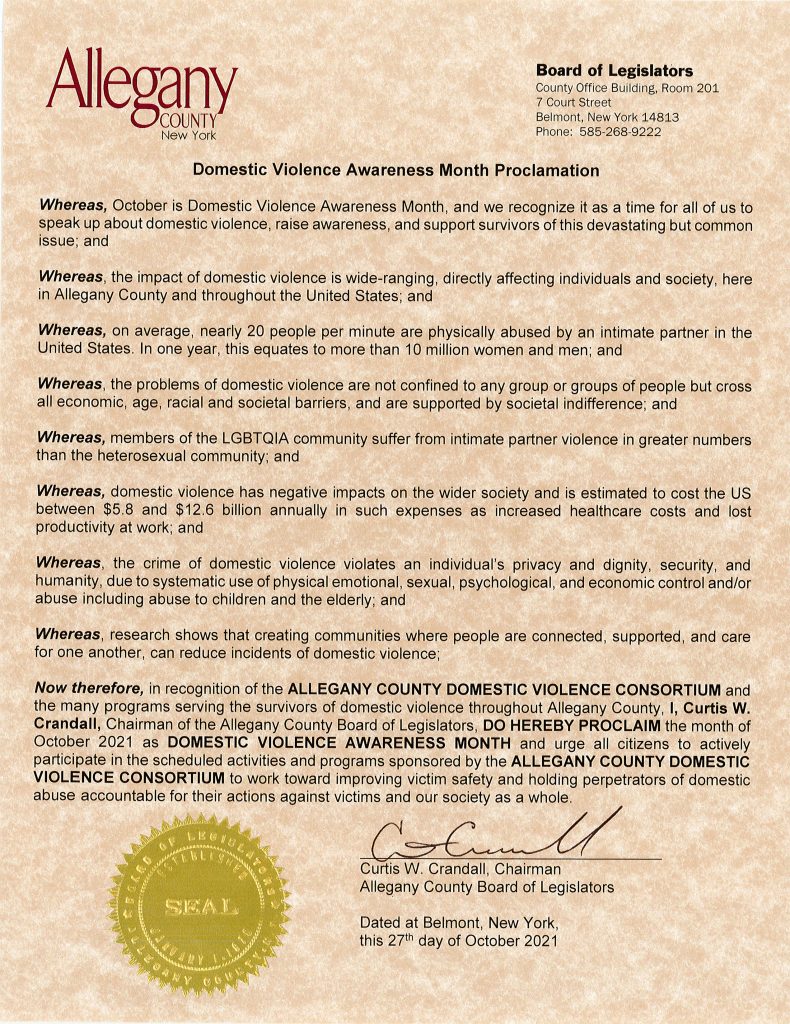